This post may contain affiliate links to books or products that I personally use myself. I may earn a small commission from these links, at no additional cost to you. Read full privacy policy here. 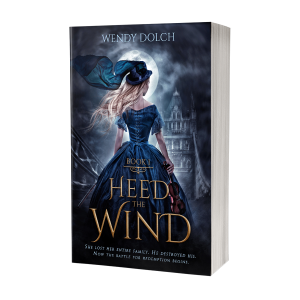 Hi, I’m Wendy, author of the Heed the Wind series.

Heed the Wind is a historical fiction novel set in Victorian London. A lot of readers when they read a historical fiction novel will often question whether or not the novel is historically accurate. Also, readers might not be aware of all of the aspects of history that an author is portraying in their novel.  That is why we write historical fiction – so that history is not forgotten. Plus, what occurred in history has shaped our present, just as our present will shape the future. So it’s important to be aware of history. I think it is also important that an author stay as true to history as they possibly can – but, bear in mind that it is still fiction, and therefore we can take a few creative liberties now and again 😉

That being said, I would like to share with you the top five characteristics of Victorian England in Heed the Wind.

The Irish Potato Famine is the catalyst for the entire story of Heed the Wind. It was a time of mass starvation in Ireland between 1845 and 1852. It was caused by a pathogen that infected potatoes. So, potatoes were extremely important for nutrition. It was the staple food for the Irish and without it about a million people starved to death, and another million were forced to immigrate. A lot of families were too poor to leave, so some of the members would stay behind and others would go, with the intention of gaining work and sending money and food back home. This is exactly my main character’s story. She and three of her brothers immigrated to England with the intention of working and sending money back home.

This brings me to historical element number two: child labor. This is a major theme in my novel – we see it playing out in the fields of Ireland, in the coal mines of England, and in the factories of London. This is a really great article that sums up child labor so well: https://victorianweb.org/history/hist8.html   In 2022, we are so far removed from this. We have no idea that children played such a pivotal role in industrialization – they helped shape the world that we know today.

Industrialization is element number three. A lot can be said about industrialization. My novel touches on this element with the coal mines and with the cotton factory owned by my notorious and also beloved antagonist, Smitherton Bobs. Through him, I seek to show the cruelty of many factory owners at the time. It was a harsh environment, children did work barefoot, children did lose fingers and toes – adults, too. People died. Their work killed them at very young ages. Yet, they were actively forming a new world – what would eventually become the world as we know it today.

Along with industrialization came dirt and lots of it. My go to book while researching Heed the Wind was: Dirty Old London: The Victorian Fight Against Filth by Lee Jackson. So this book goes into great detail about just that: dirt and grime in the Victorian era. It talks about such things as chimney sweepers, and the sewage problem: where sewage would literally run down the streets like streams. Plus, horses left their manure in the streets. People didn’t have showers back then. Bathing didn’t happen every day – so he talks about the great stink. Well, you can imagine. I mean, it was gross. It really was. Disease was rampant. Infant mortality was high. It was just a really hard time.

So what do we do with all of this information that we have talked about? What idea of Victorian England comes to mind? When I think of all that we have talked about so far, famines, death, hard labor, disease, I wonder what were people living for? What went through the mind of a man, woman, or child sludging through the sewage in the streets at five in the morning, so they could work a ten hour day for pennies in wages? Was their work in vain? Was their work meaningless? Was the work for which they gave their lives useless?

Oh no, it was fruitful and it multiplied. We are the obvious testament to that. The fact that we can sit in our heated houses when it’s negative degrees and blizzarding outside, is a testament to industrialization. We don’t have to live on potatoes alone because food is so prevalent and easy to get. But – okay, the Victorian people probably didn’t have that in mind when they slogged to work each day, so what did keep those people going?

Because I operate from a Christian worldview, my answer is Jesus. I see no other way or reason to comprehend it. I think God has instilled within us a need to survive, a desire to live no matter the circumstances. We desire life and Christ offers eternal life in Him. The love for family, I think was second to that. You’ll see that a lot throughout Heed the Wind – people had to work to support their families.

Religion in the Victorian era is an interesting historical topic to study. Christianity was the dominant state religion of England, Wales, and Ireland, but it was also a time where many began to question their faith. It is, of course, the time of Charles Darwin and his theory of evolution. There was also a lot of Spiritualism beginning to emerge, ideas that sprang from Hinduism and Buddhism. The cruelty of the times and the great suffering that people experienced turned the people away from religion. In other words, people’s sin turned people away from God. But where it turned some away, it also strengthened others. The antagonist in the Heed the Wind, Smitherton Bobs, is an example of a person devastated by anger, despair, and sin, and the greatest hope for him lies in the person of Jesus Christ and the redemption that only He can provide.